Making a show go on...and other 'i' words

When we experienced problems with one of our technical teams in Grahamstown the cast I had the privilege of being part of started joking about ‘i’ words, such as incompetent, irresponsible, illiterate, irregular and my new addition..iLate. So, whenever we were challenged with a challenging team we would make reference to the ‘i’ words...

If there’s one thing I’ve learned as a lecturer it’s that you cannot please all your students. Never mind their parents (who I assume are not aware that their offspring weren’t prepared for that test, didn’t know their words for that dialogue…and what assignment again?). But for those who really try its always amazing to see results. To see them grow in the space of the few hours I’ve worked with them, or the few weeks that we had to perform a piece. And very often in our field the only way to learn how to do something, is to do it. Especially when it comes to a field such as directing.

As one of the drama lecturers at a local musical theatre college, a colleague and myself encouraged two third year students, eager to direct a play, to enter a piece for the local Student Arts Festival. The play could also then serve as an assessment for them. But they had to direct it, plan it...do it. And if they got stuck somewhere along the way my colleague and I were an email away to fix, or help. We gave them a play text, we gave them a cast, and space to rehearse during the holidays. They were to rehearse with their cast while I was away performing in Grahamstown. And the deal was that upon my return I would view, spit and polish their show in the two weeks I was back before the festival started. When no one replied to emails while I was away performing I got worried. When emails were not replied to once I returned I was even more worried. I informed them that I would be viewing them on the Friday afternoon, as their first technical rehearsal would be upon them soon. And then asked for a response. A day later I received from one of the 'aspiring' directors:

“I can’t make the viewing”

A number of email exchanges later, including excuses, and resignation that they had been at fault, it came out that that they had not started in time. Or in fact started.

I couldn’t believe it. The first of a series of 'i' words started going through my mind. How someone could not have started working on a production less than two weeks before they were to go on stage had me at wit’s end. The two directing students asked if they could pull the production from the festival, and were willing to pay the penalties of doing so. I asked them to call the festival manager to do so. Immediately. I figured if they didn’t learn from the experience of directing a play, perhaps they would learn from cancelling it themselves. I also asked for immediate action as time was in short supply. I received an email of confirmation, so when the festival director phoned me the next afternoon, as I was the contact person for the college, I asked if the students had cancelled the day before. They hadn’t. And, at that point, it was impossible to pull the show from the festival as the electronic system which now dealt with ticket sales had been put in place. That Morning.

So, with a handful of outside students from a singing lecturer at the college, and a handful of students from the college I put together a jazz singing show. Mikes were organized, my colleague and I plotted lights (before the show existed) and in two rehearsals, we had a show. It was chaos on the technical box as I qued two frightened looking first year drama student sound and lighting operators. And with what I considered to be a relatively decent turnout for the first performance from an unknown college the first show was done. I was relieved, probably not as much as the sound and lighting operators, to have survived the first performance. The second performance was sure to go like clockwork.

Wrong. Upon my glowing return to my flat I received an email from the singing lecturer, informing me that all her outside students refused to perform again, at 10:30 the next morning because they felt that the audience turnout was too small.

I reread the email in disbelief, rather sure that some fever must have caused me to hallucinate, as I have never heard of performers refusing to perform a show because ‘there weren’t enough people in the audience’. After confirmation of the facts on my second read a number of ‘i’ words flashed through my head. I contacted the head of the school. And a couple of phone calls later it was decided that we would make do with what we had. Add a few more items that were in the repertoire of the three remaining students, and one outside professional and I would just have to make it work on my own. Especially as my colleague could not attend the show, and the head of the school was leaving for France that day.

So the next morning I put on my professional director’s face and headed off the theatre with all the fake enthusiasm and visage of calm I could muster concerning my general state of panic. Especially as the ‘outside professional’ (a term I use loosely, and carefully avoid naming him and using words like ‘indecent’) cancelled that morning. In an sms.

So with three regulars and a friend who happened to be there and who decided to help out, just because of the absurdity of the situation and because she had a backtrack on her cellphone I put together another show.  In the 45 minutes we had to move into the theatre a song order was decided upon and a CD cut, the lights were replotted and so was the movement of the actors on the stage, and the transference of microphones. And, one of the performers had car trouble and arrived as we had to open the doors for the audience to enter.

I was in a state somewhere between panic, chaos and directorial autopilot but the show went on. On time. Incredible.
Posted by Unknown at 06:01 No comments:

Ladies and Gentleman, welcome to this National Arts Festisal Production.

Performing in Grahamstown is always the highpoint of my year. Being at the National Arts Festival, watching shows and being inspired by the works of both accomplished and emerging artists. Being surrounded by thousands of posters, and constantly being handed flyers, and bumping into people you saw give a breathtaking performance just last night is all part of the festival experience for me. And nowhere else in South Africa will you ever see so many people with dreadlocks in the same location.

But being little known, and performing on The Fringe you are not always guaranteed and audience. On more than one occasion I have performed to an audience smaller than the cast of eight on the stage, and at one of these performances a reviewer was in the audience gave us an award. So when you don’t have a well known name, or twitter following rivalling that of Gaga you need to market you show. A lot. Or else you might be performing to the technical crew. So every year, we go with our posters, and flyers, and this year our matchboxes with the show times stuck on them. And we hand out complementary tickets, and we chat people up and inform them about our shows, and what we do. And sometimes despite the flyers and press stick and making sure your posters don’t wash off the walls in the rain you know will happen at some time during festival you still don’t get a sizable audience. This year, however, the past two years of marketing started paying off…

When we had performed in Pretoria in one of our “Preview Performances”, before we left for Grahamstown, we were not informed as to when exactly the show would be starting. Due to some technical difficulties with ticket sales we knew we would be starting slightly late, but that was as much as we knew. The cast was standing in the wing, knowing that, at some time in the near future someone would announce something and we would start. And as we stood there I noticed a backstage light that would potentially disturb the show was on, and as I reached the furthest point to turn off the light the music which started our show started playing. I tripped on the stairs running to make my que, while one of my fellow cast mates whisper-screamed for me in panic. I made it. Barely. But was rather paranoid about not being on stage in time for every other performance thereafter in Grahamstown. And it nearly happened again in Grahamstown. Being myself, and constantly getting myself into awkward situations I had cut, or more accurately sliced my finger quite badly. And after contemplating my next action, for too long apparently, I decided to run backstage and put a plaster on my finger. As I ran up the stairs the pre-show announcement started, and I ran back down again. 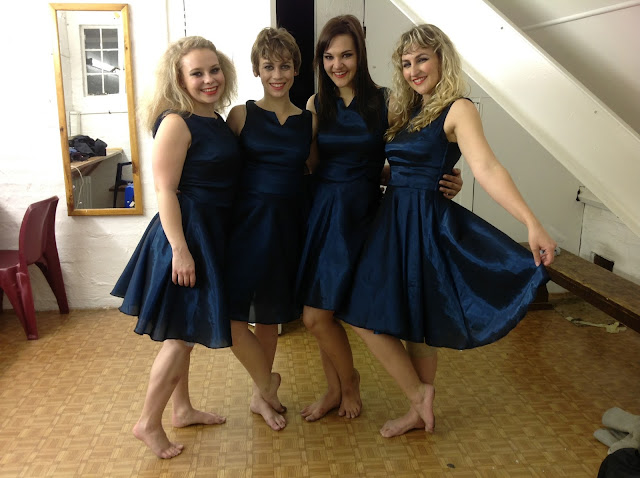 Before our first performance of Chasing we stood in the artificially warmed girls dressing room. Due to the fact that most of the performance venues in Grahamstown are make-shift and have various other functions for the other 355 days of the year, there is no system for the technical crew to let us know backstage when we are about to perform. So again, we stood and waited for the voice over, every show in Grahamstown plays before the show starts. Ladies and Gentleman, welcome to this National Arts Festisal Production...

As we stood backstage in Grahamstown, literally in the dark, and in the dark as to exactly when need to be ready to perform one of the cast members commented that even if nobody came to watch our show we should do a run of the show just to make sure that all the technical aspects were correct. And then we walked onto stage in the blackout to start the show, and the venue was almost full. Centenary Hall, with a capacity of almost 300 people, was almost full. And as we took our bow at the end of the show, the entire audience rose to their feet.

In my career so far it was probably one of the most humbling moments. And all the infected floor burns, blistered feet, hours of rehearsing, hours of travelling and technical rehearsals were all worth it. For that moment, before I walked off stage. And it’s for those small moments that we do what we do.

And this week I get to do it again. If you are in Pretoria, or close by, drop in by the Krekvars Student Arts Festival on the University of Pretoria main campus. Come and support the experimental and the young and upcoming. And catch As Night Falls, tonight and Wednesday at 21:45 at the Masker Theatre and see what the rave was about in Grahamstown.