Top of the Billing

So Yesterday morning (Sunday) I awoke at 5:30. I washed, devised, drew, painted and constructed myself into some semblance of class and presentability (I hope!) and left my flat two hours later to pick up a friend and then head off to Johannesburg. We arrived at the Bidvest Wanderers Stadium in the cold and wind and after edging my car assisted by a car guard into a harrowingly narrow parking spot the two of us, CV’s and photographs in tow, headed off for the Top Billing Presenter competition. So we filled out our forms, got our photos stapled, pinned our numbers to our shirts and headed off to sit in the stadium and wait.

Before the proceedings for the day were to commence the obligatory shots for Top Billing needed to be taken. We were all told to remove the extra clothing and blankets, and to look ‘glamorous’. I’m not quite sure how possible it is to look ‘glamorous’ on the grass of a cricket pitch on a grey Johannesburg morning in June but some ladies certainly tried. Now for some context. I was wearing two trench coats over each other and I was still getting cold. For the camera shots on the field some girls stripped down to mini dresses, and miniskirts with cleavage and heels. Before we started the takes one of the Top Billing presenters (Ursula) looked at one of these hopefuls in her short, blue one shouldered dress: “Darling, nothing is worth getting pneumonia for”. Now this same presenter I have to say made my day. While we were standing in the cold on the cricket pitch the four presenters delivered their lines for the camera with us in the background (not getting cold for the sake of the camera). One of the other presenters botched her line, and upon doing so blasphemed. Ursula calmly said: “Don’t blame him”. I decided then and there that I would adopt this phrase whenever I was in the presence of someone who did the same.
﻿
﻿

The morning dragged on in rather epic variations of catching a spot of sunshine to shivering in the shade. My friend, Miss Rozanne Mouton and I sat distracting ourselves and talking about everything else other than what we had planned, or not planned, to say during our audition. I eventually asked her if she would like to practice. I think perhaps more out of boredom than anything else. We sat there, she had decided that she would go through it in her head, not out loud. A second later I heard “Damn it. I made a mistake in my head!”

And nine o’clock moved to past noon and eventually our row moved forward, and we would be moved from the stadium seats to the elusive backstage area where we would audition for presenters and various members of the crew and production team. As luck, or fate, or Murphy would  have it Rozanne was number ten for audition room one and I was number one for audition room 2. We were split and would face the rest of the journey alone.  Rozanne hit it lucky with some sort of promotion, who photographed her and sent the photo directly to her phone. Below is the photo they took of her! 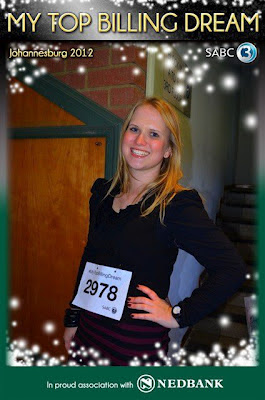 I entered the audition room. Bright and smiling and greeting my panel with a great confidence over my shaking body. If it was nerves or the cold I certainly wouldn’t know but I’m an actress. I can fake the hell out of anything, so I did my link. Walking and talking from point A to point B. Apparently according to my panel of judges it could have been smoother, but  good none the less. Again. I’m an actress, we make things interesting when we move, but so I learned. I was told to keep my number and wait and if I didn’t get a phone call by Monday night then I know I didn’t get a call back. I felt quite positive, but then again they might be saying the same thing to everyone. And all that is left is to wait and see i I recieve a phonecall tonight.

So Rozanne and I grabbed our (many) coats and headed for the car. The GPS showed the nearest mall to be Melrose, and after decided I could afford to spend R30 on a cappuccino if that happened to be the price in Melrose and that I would pay it off we went to go discover Melrose. We headed to Europa for a cappuccino for Rozanne and a Chai Tea for me (No caffeine!) and the post-audition-now-tradition phone call to the mothers.


As we drove  back I jokingly said to Rozanne that I had such a nice time at the coffee shop. It was fantastic that we could fit in the audition as well! 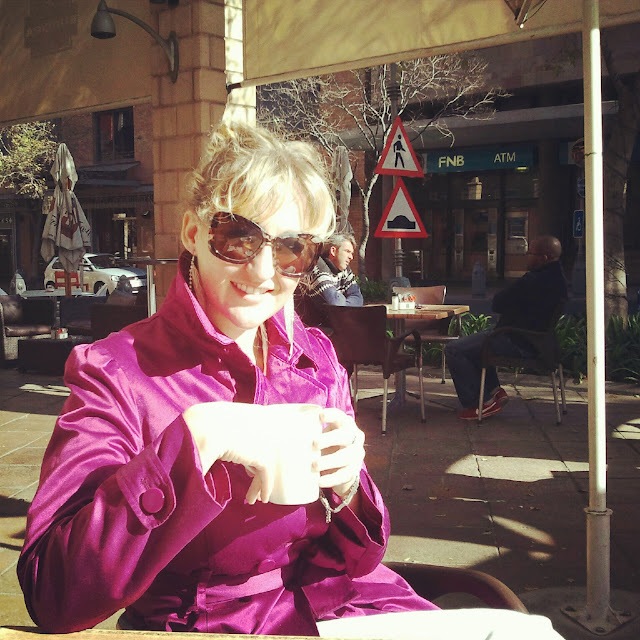