I had received confirmation that I would be flying down to Cape Town to shoot an advertisement for an undisclosed client, at an undisclosed location for an undisclosed product (I signed a non-disclosure agreement before I had even left the airport grounds). All I knew was that I had to be ready to leave at short notice. Saturday evening I got a phone call from the production company doing the shoot. The needed my ID number to book a flight for me for Monday morning. Early Monday morning, and I was to pack for “more than a week”. So I did, and Sunday afternoon I received an email with my flight details, for seven am Monday morning.


So at 5:30am Monday morning I was in the check-in queue at Johannesburg International Airport. Two people were standing in front of me, and I heard mention of the product the advertisement would be for, so I assumed they were also flying down for the shoot. Out of the corner of my eye I saw my brother and a friend who had come with to drop me off trying to get my attention. Whispering and pointing at the two people ahead of me in that restrained way which was supposed to get solely my attention, but not the people ahead of me. I shrugged.


When I moved to check-in my luggage my friend came up to me. “Did you recognise them?” My friend had placed them, since the original bout of whispering and gesturing, that the pair are both known faces on South Africa and TV and film.
On the flight I met another blonde of (roughly) a similar age sitting next to me, and halfway through we figured out we were going down to work on the same shoot. A trip to bathroom after we landed and we followed the flow of passengers out of the bathroom to the luggage carousel. In our deffence, we had been sitting right at the back end of the plane and were therefore some of the last to get off. We are also both blonde. And after waiting ten minutes, and there being hardly any luggage left on the carousel we realised there might be a problem. As we walked to the office that dealt with luggage queries a large came looked at the both of us:


“We have your luggage inside. Can I see your tickets”


It didn’t matter however, because I was in Cape Town, being picked up by a driver, and on my way to get booked into the hotel before my costume fitting later that day.


Booking into a four-star hotel, a walk up Kloof street and phone call to my mother later I was picked up again to go to my fitting. While in the elevator at the appropriate venue my agent called me: 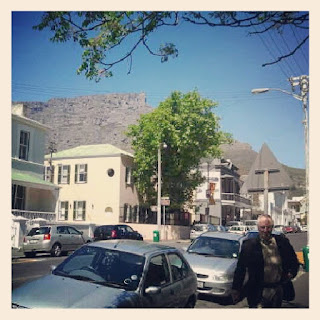 
“I’m in Cape Town already, about to go to a fitting”


The costume fitting was interesting.  I was forced into a too-small costume, which wasn’t quite symmetrical. I was assured that another, better fitting costume would be created for me, as they wanted me to feel comfortable. I nearly kissed the wardrobe lady. I also met some of the other girls that would be working with me. I was the only girl from Johannesburg in our group. I was also, as I put it, the curviest of the girls, some of them being full-time models, and such. When the client and director came to view us I at first felt very uncomfortable. About ten people walked into what had originally been a safe space, with all of us feeling uncomfortable in the costumes. And all ten people were looking at each of us rather intensely. And then I decidedly made a mind shift. When these people are scrutinizing every part of you and they aren’t scrutinizing you. They are looking at how you look in the outfit, trying to place the entire look into the context of what they are shooting. It’s not about you per say. It’s about the package, and the moment I told myself this I started to relax, and felt a little less like a cow at auction.


I think the biggest thing I learned during this shoot, besides actually working on something which was, in my opinion, rather high budget, was the changes in attitude I need to take. And this, on my first day in Cape Town, was the first one I needed to make if I’m going to survive this path that I’m on.
Posted by Unknown at 00:14