The stars do shine brighter in Africa: At the Naledi Awards

I’m not someone who believes in coincidence. So when the head of the college where I teach at ‘happened’ to let her students know that she had managed to get tickets for the students to attend the Naledi Theatre Awards on Monday the 17th I knew the timing was not a coincidence. So, as the drama and theatre lecturer I called and asked if there would be a ticket for me as well. A weekend spent on tenterhooks and Monday morning provided a message: She had managed to get a ticket for myself, and for my boyfriend/partner/long-suffering-plus-one.

So straight after a Monday morning audition I hopped through my second shower of the day to get ready for the awards, and then head off on the trek from Hatfield to the Lyric Theatre at Gold Reef City. 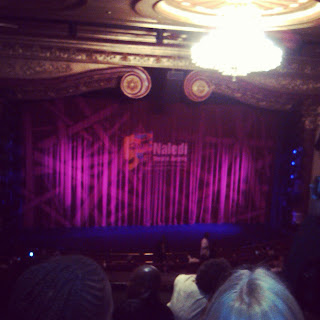 A red carpet, wine on arrival and circulating snacks set the tone for an evening of glamour. And surprisingly for me, running into some acquaintances.  A few people that had studied at the university while I was there, and some friends I had met along the way. I also saw some faces that I recognized from shows and put faces to names that were familiar. As someone who grew up in a small town, and an actress who is in awe of a lot of these people I felt a little like Alice in Wonderland seeing these people, and attending the same function. I bumped into a friend, and as I didn’t know for certain that I would be attending until a few hours before the awards ceremony I hadn’t read through all the nominations. I asked, rather sheepishly:

“It’s probably in bad taste to ask at the awards, but are you nominated?”

He laughingly replied that he hadn’t been, and had ended up at the awards in a similar fashion to the way I had. 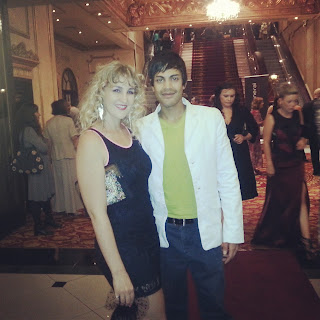 The awards themselves were amazing with performances from some of the musicals performed in South Africa in the past year (including Phantom's Phantom Jonathan Roxmouth and Cabaret's Samantha Peo), as well as some firm favourites and the amazingly talented Allan Committee who was the hilarious Master of Ceremonies and had the audience in fits of laughter throughout the evening (which ended in just over two hours).  As a young actress, attending for the first time it was nice to be to there without having been involved in a production that was nominated, as if I ever am in the future it creates perspective. No matter how many stunning performances there are, there can be only one winner. And at the end of the show, I’m not working for awards, I’m working for every audience member who attends each show.

At the end of the evening I was talking to a fellow actress when I was asked to stand for a photo just before we left to go home. I didn’t think much of it, until a photo I posted of the Nalide awards on Instagram got a comment
.
Mika Stefano, a South African entertainment and gossip blogger commented on my photo that he had a photo with myself with fellow actress Denel Honeyball and choreographer Nicola Elliott and that he would be posting it on his facebook page. And so it was…