Above and Behind Stage

A friend of mine and I have kind of a tradition. Since my first year every single November come exams or high water we do technical work for a local ballet studio’s end of year show. Even though its physically quite hard work, lifting large set pieces and carrying props around, the studio's teacher uses us girls to help the dancers  with quick changes, or to tie ballet shoes and such. Unfortunately last year I was working and could not do it, but this year I was awaiting the summons. Just before November started I asked my friend if she had heard from the Theatre Manager about the show, and if they wanted us to come in and work for it again. My friend said if she had not heard anything by the end of the day she would call the next morning.
About half an hour after our conversation a message appeared on my phone. We would be starting with a week's work on Monday.
Now every year there is some or other very large prop. A house that needs to be wheeled in midway through a dance, or a throne that weighs about the same amount as I do. And there's always something hanging from the fly bars. Whether it’s just flakes being released from the snow sheet, a chandelier that needs to be dropped or a mere sign.

This year we were spared the heavy lifting but four swings had to be released from the fly facilities which we had to catch as they were dropped down in the wings and then swing them on stage (in an aesthetically pleasing manner), and then later knot two swings together with a rope and have the other stage hands in the roof pull them back up again in literally a matter of seconds. The four swings were hanging in-between the lighting bars, so too much movement from the swings could not only move a light, but hook it and perhaps break it. After about half an hour of closing our eyes and not looking up while the teacher and various other people swung myself and my friend around on the swings, seeing how much movement could happen without the lighting being a problem they realised another solution needed to be found. So the bar with the swings on was holstered in a manner which would prevent it from swinging into the other lights. And after all our effort the swings were used for about a minute on stage before they were pulled up again. 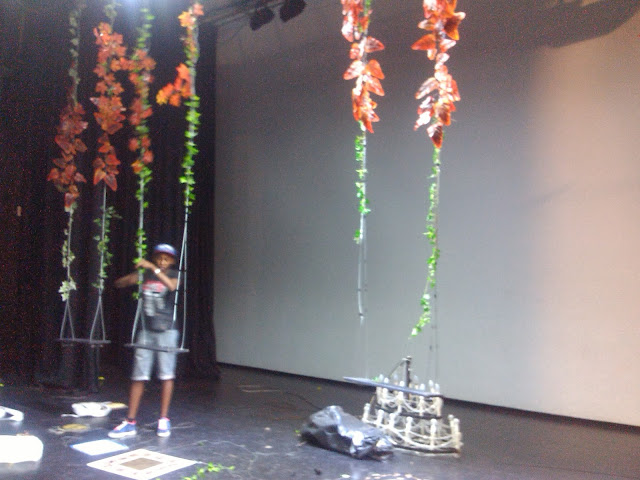 We were also taught the knots to use so that the swings wouldn't come lose half way through a show and decapitate a dancer, or some such nonsense. On my side of the stage, with my friend being in the opposite wing, the rope which I need to tie the swings back up again with hung far behind me, and I needed to release it into the waiting hands of about ten dancers between the ages of 4 and 7. It’s entirely safe, but I need to grab the rope again later and children, being children, find the rope hanging from the heavens exceptionally fascinating.
Our stage manager commented on the dilemma:

"Its’ find having them play with it, they won't hurt themselves, but you know they will have wound it all around them by the time you need it"

"Yip, and there will be a suspended mummy hanging behind me by the time I need to tie the swings up again"

We decided to throw our ropes over one of the lighting fixtures instead of letting them hang behind us.
On one of these occasions when I had to release and retrieve my swings I was surrounded by the wings, unable to see much else of the backstage area or stage itself, awaiting the swinging moment. Afterwards I heard from our stage manager that she couldn’t see me, engulfed by the black curtain of the wing, and was starting a mild panic as the big moment drew nearer and she didn’t know where I was.
“I asked myself at what point do I abandon my com set and start looking for you. Where would I even have started looking for you”
Just as she was pondering this decision she said she saw the slightest sliver of my elbow poking out behind the wing, and she knew I was at my post, awaiting the swings from the heavens. 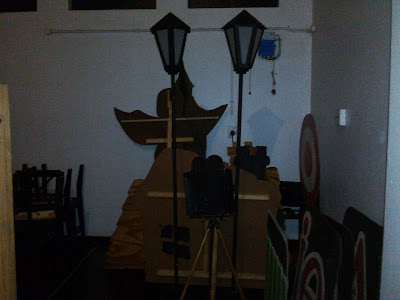 As show business tends to go, there were quite a few quick changes. As the pre-teen girls ran into the wings my friend and I started unzipping the back of their dresses so that they could get the next costume on in a matter of seconds. As they realized there were two pairs of hands zipping and unzipping, and they didn’t need a friend to do it we had girls, high on performance adrenaline and time limit wiggling and jumping around in front of us “Zip my dress! Zip my dress”.

Only by the last quick change did they realize that the whole process goes a lot faster when they actually stand still, or didn't squirm until the zips on the dresses stripped and Lian and myself had to safety pin the girls into them.
Posted by Unknown at 03:18