It's all in the Signs

I have no sense of direction. And many large theatres have large and intricate backstage areas…which are tricky to navigate. Especially if I’m nervous before an audition. More often than not when auditioning your name gets sent to the theatre before the time, so when you arrive at the theatre you names gets ticked off a list, and a member of the theatre staff takes you to the audition venue. And if I’m a touch nervous before said audition I don’t focus on where I’m going, and navigating my way back usually involves multiple wrong turns, and wringing my memory for a clue. Or waiting for a friend to finish their audition and hoping that they know their way about better than I do.

I must say, my audition last Monday was easier to navigate. I was just guided through the first door which leads to the general backstage area from the foyer and was almost expecting someone to walk with me when I saw the first sign… 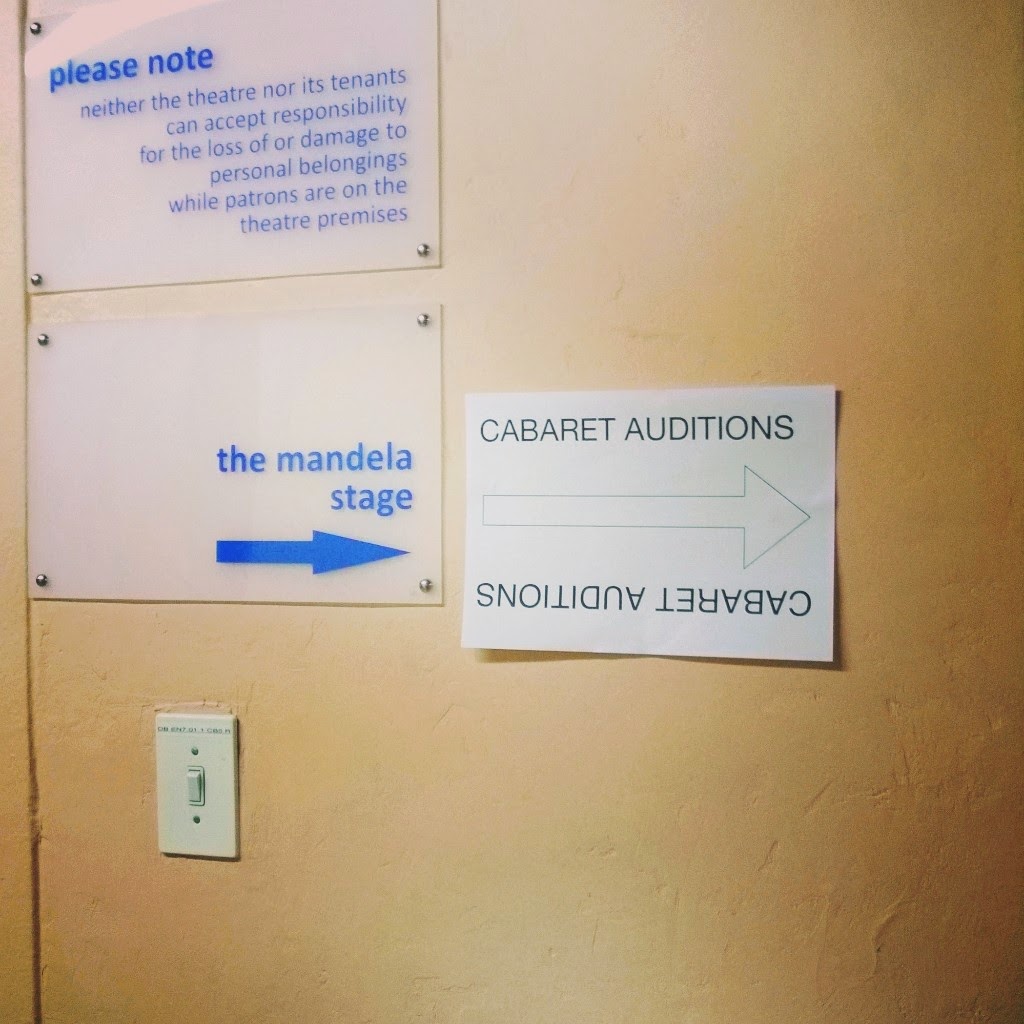 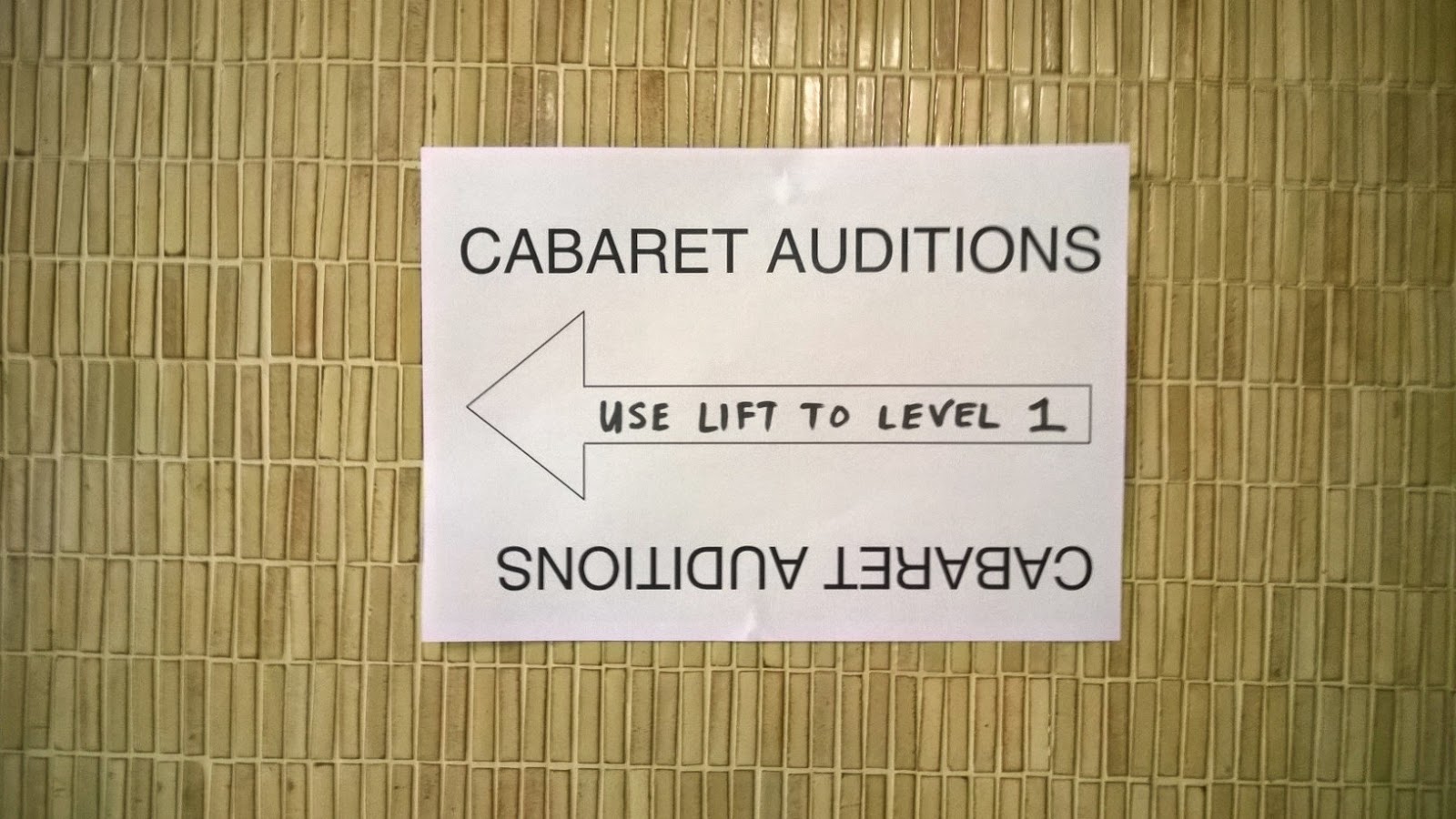 What followed felt almost like a treasure hunt as I walked from arrowed sign to arrowed sign finding my way to the audition venue. Including the beauty next to the elevator which told me which floor to go to. I was particularly thankful as I had never wondered into this part of the theatre before, and would probably never have found the place if it hadn’t been for the multiple signs. And as per usual, the dancing audition did not fail to amuse me.

It is only at a dancing audition for musical theatre that you’re the odd one out if you aren’t wearing sequenced or leather hot pants and fish-net stockings. With this specific audition we had been pre-selected on our photos and CVs before being notified that we were allowed to audition. It was interesting for me, as I usually know a few of the others at any given audition. Which is why it is good practice never to gossip at an audition because someone will know that person you're talking about. But this time I didn’t know anyone else. At all. Not even vaguely familiar face from somewhere. So with no one about of some authority, and none of the obligatory forms to fill in anywhere to be found I created my own spot on the floor and started warming up gently. No one appeared to be any the wiser as to what was coming, and usually the dancing round is first with musical theatre auditions, so most of the others were also warming up.

While in my corner I heard, what I gathered to be, the reunion of two of the other hopefuls after a lengthy period:

“What are you doing these days?”

A question often asked at these opportunities, in order to find out if someone had succumbed to taking a teaching or office job in order to pay for their habit of auditioning and sporadic jobs in the line of work they had actually trained for. Her reply was curt:

He was shocked. I stifled a laugh while pretending not to hear a conversation happening less than a meter away from me. And what followed was a soap-opera-tell-all tale of her life for the last few months. Including, I kid you not, a cheating boyfriend and a reality show about their lives, airing post-break up. She also claimed that this was one of her first auditions in about three years, as she hadn't needed to audition while dating said boyfriend. Work was offered to her. And so, in the 45 minutes we waited to start the audition I heard the tale of her life post-breakup as she related it to her friend. I didn't really have anywhere else to move to in the semi-cramped quarters during this exchange. And it did feel like a reality TV show.

Thankfully I was able to follow the myriad of signs back to the theatre’s foyer! 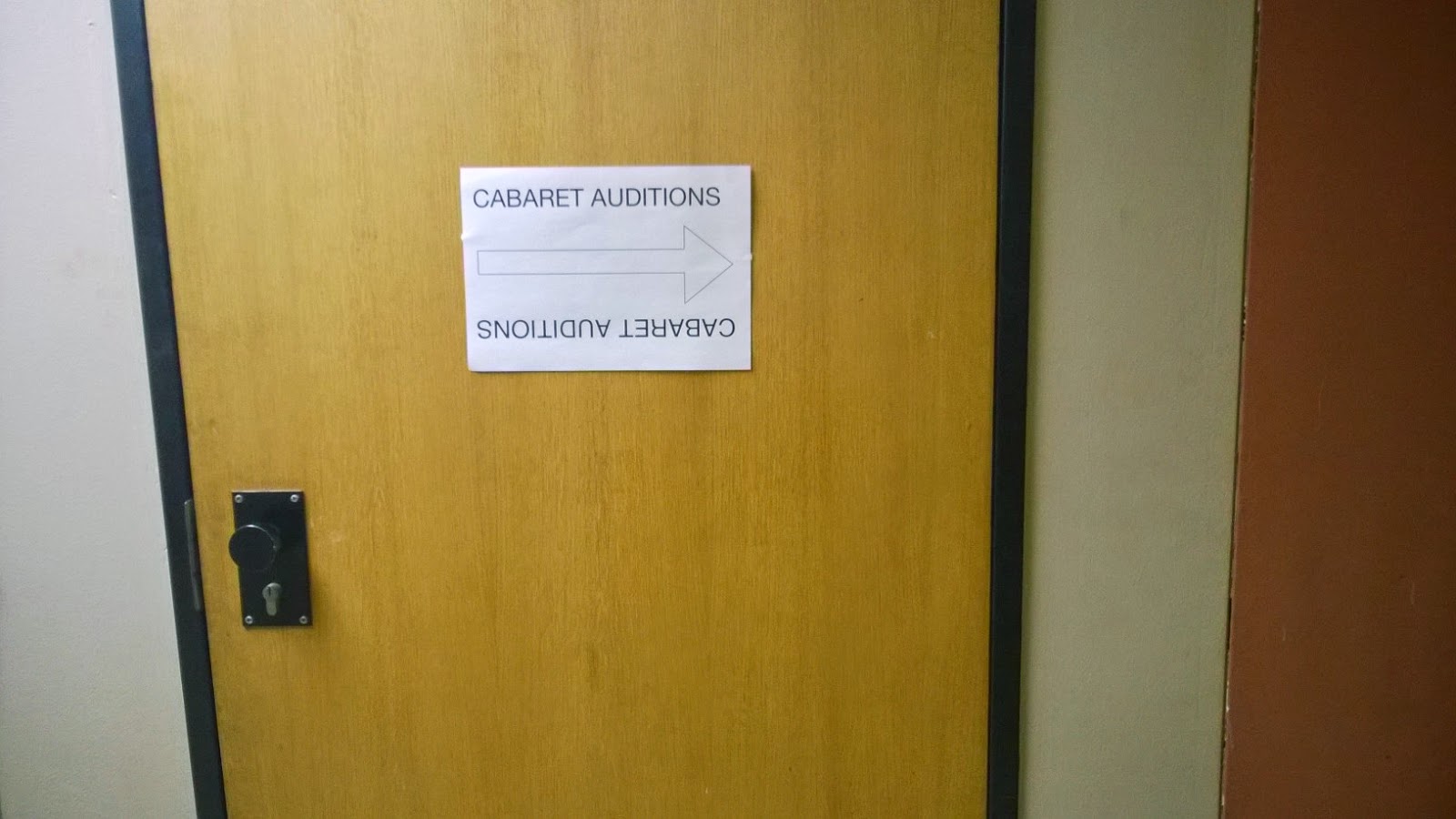 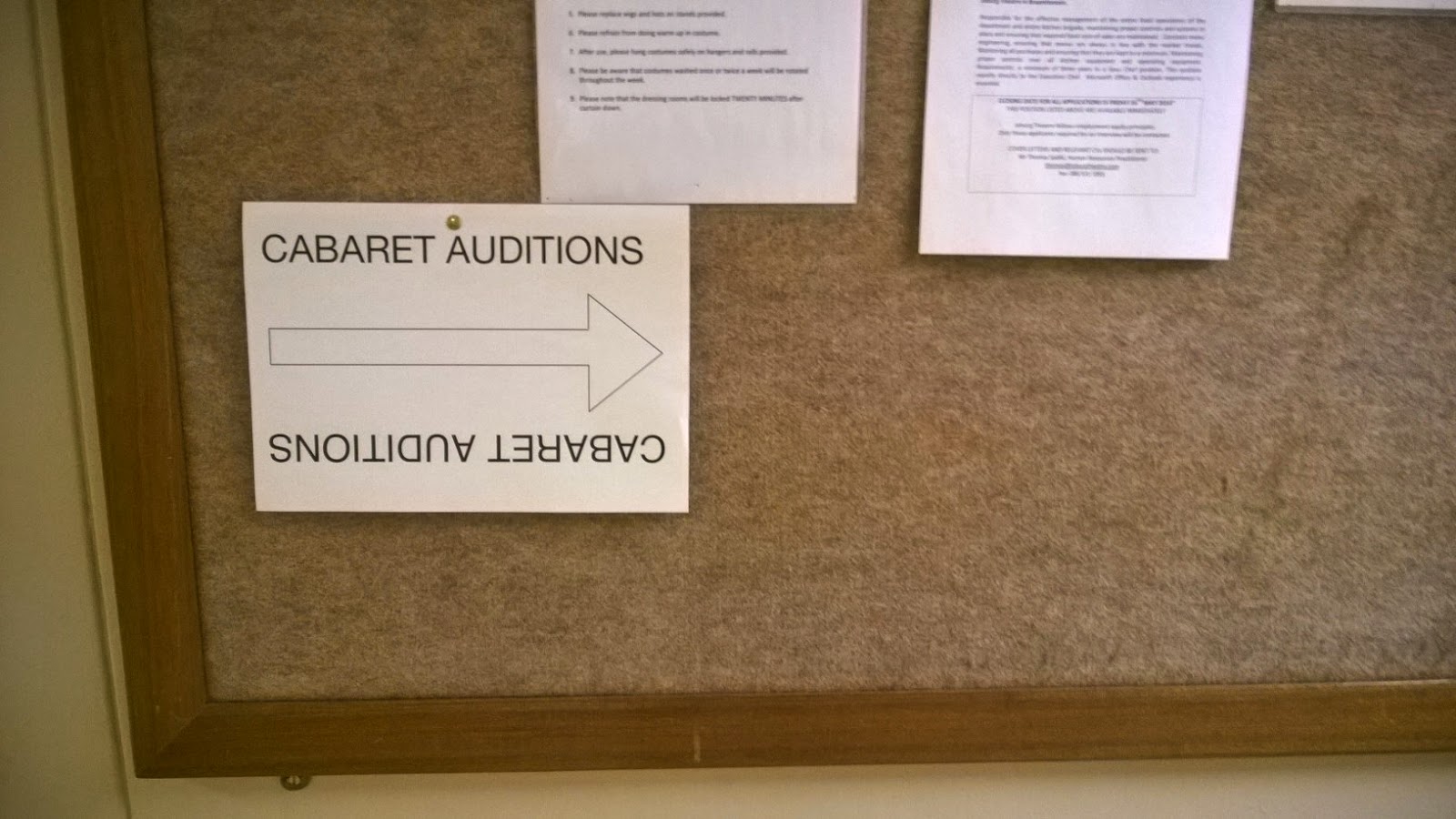 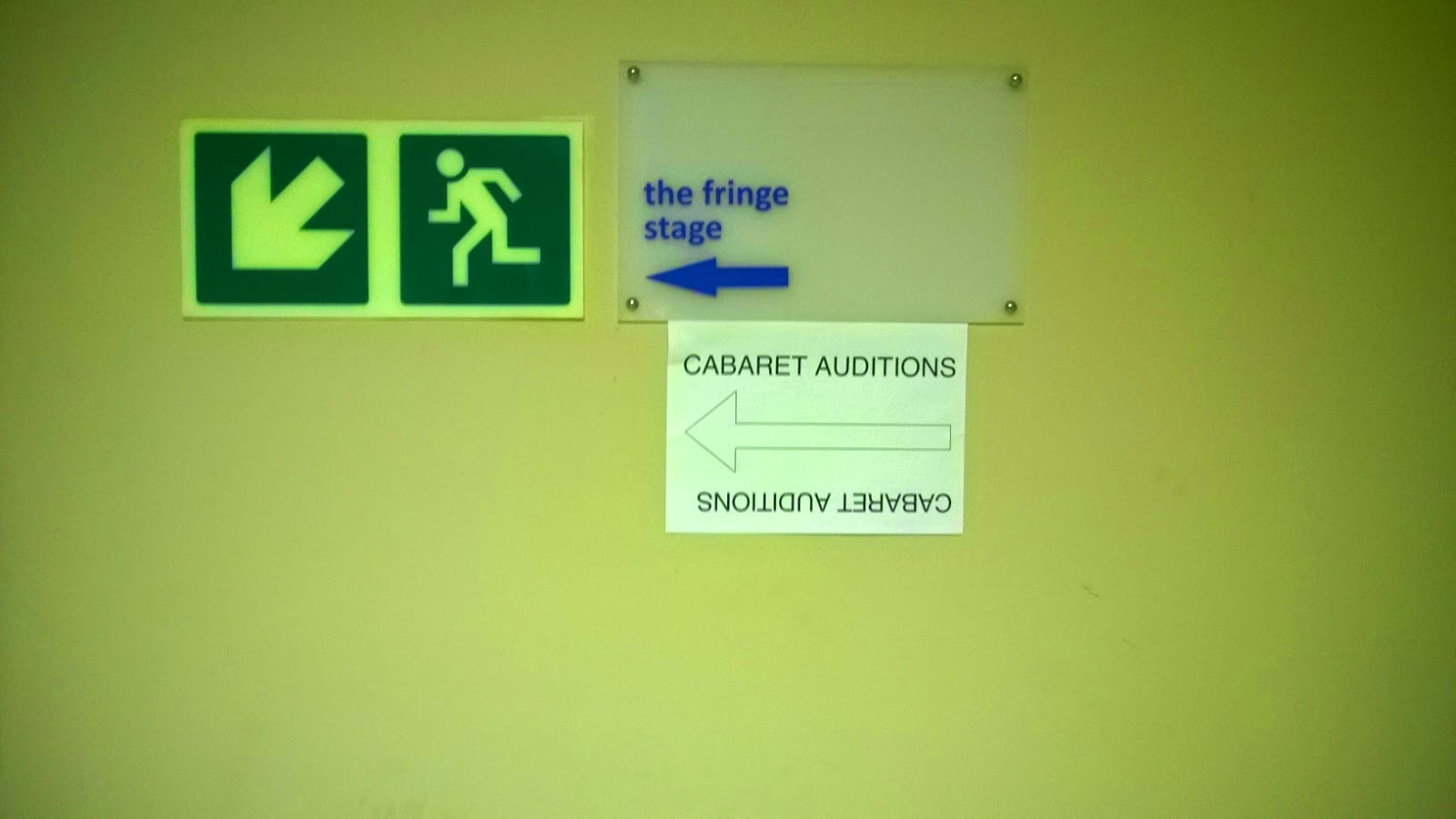 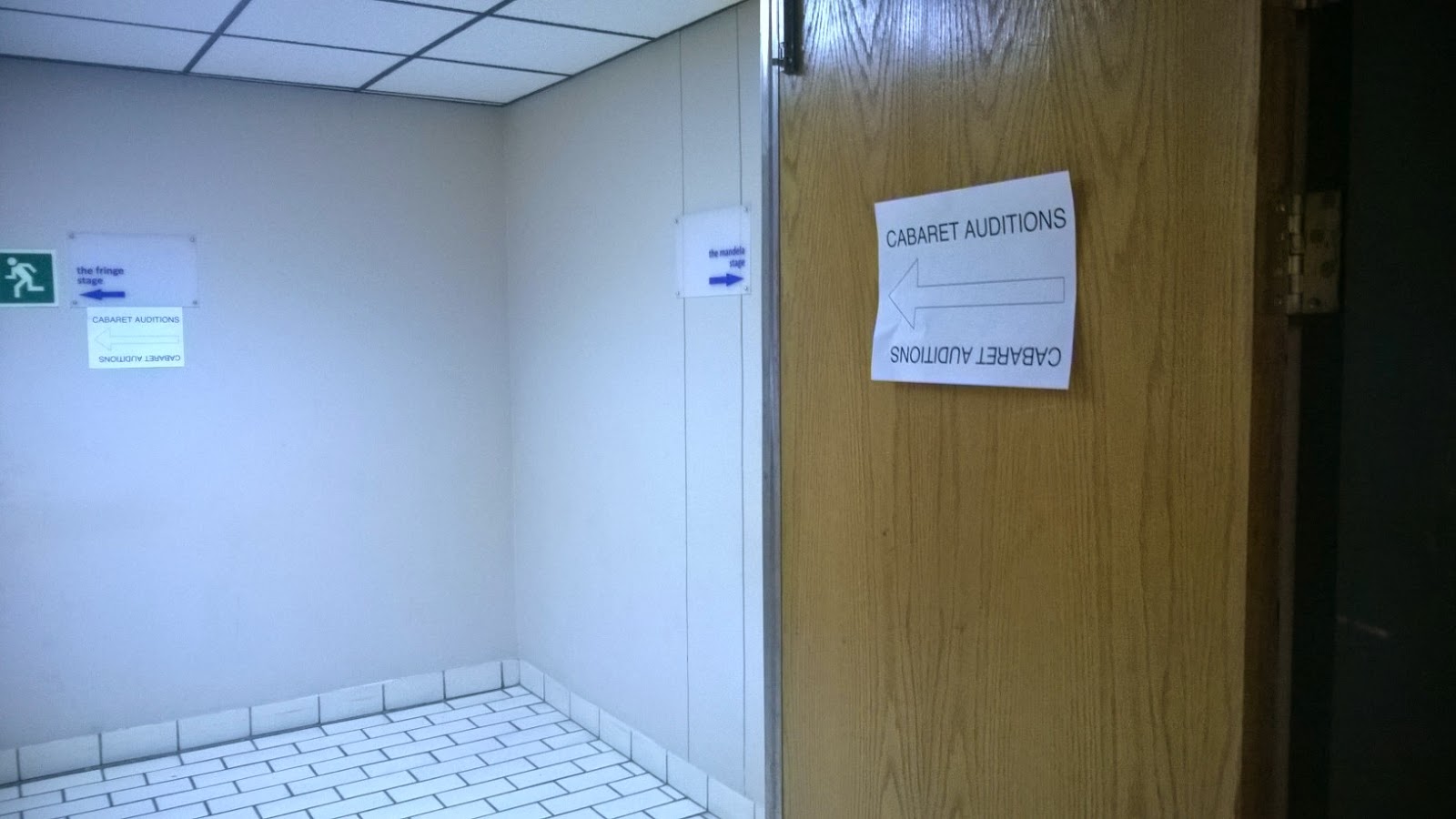 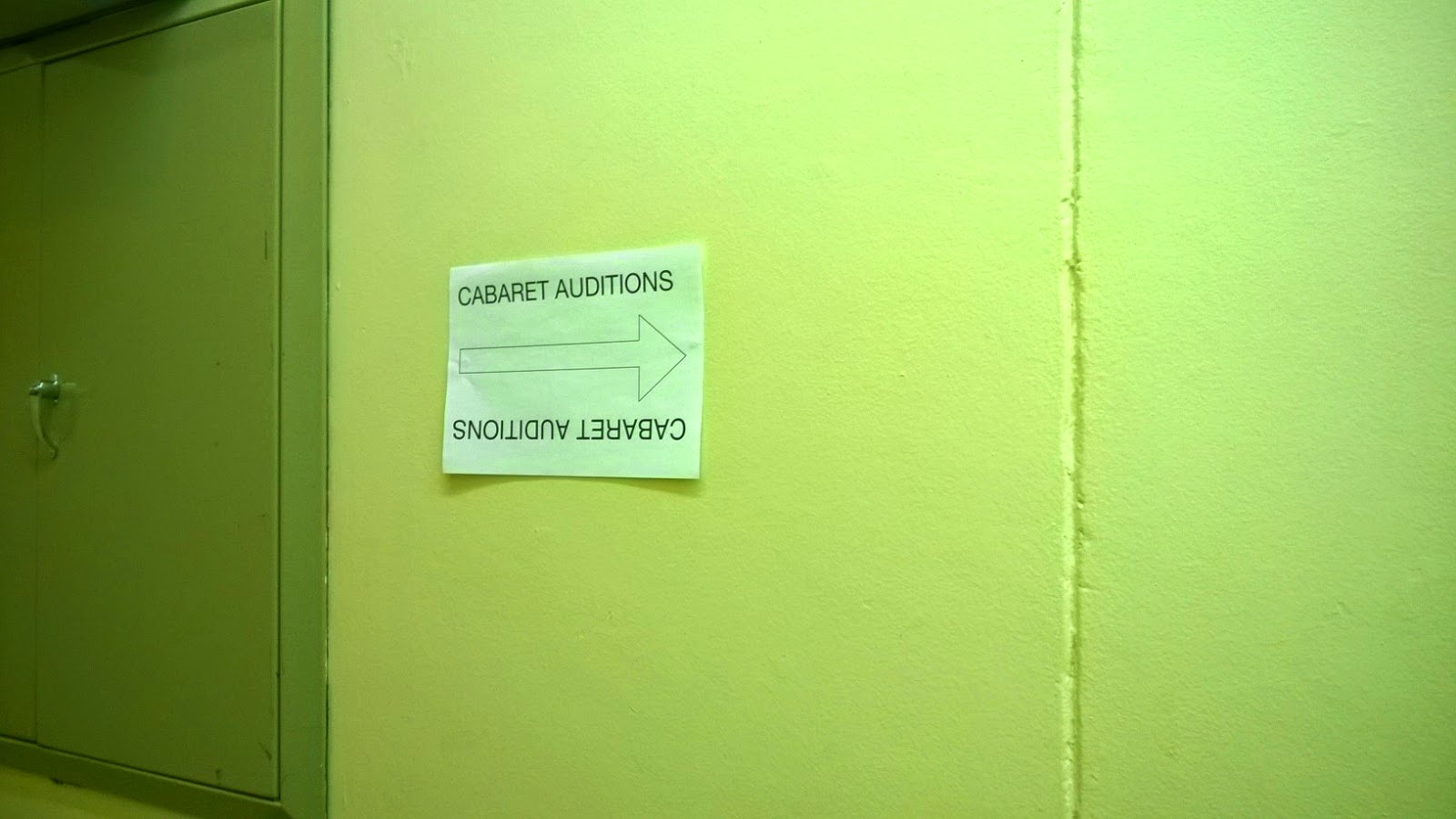