The Audition Must Go On!

I have a history with hospital emergency rooms and performance. From the age of fifteen already. For my final physical theatre exam in my Third Year a friend of mine and I performed, what we still consider to be, a really good piece of choreography which the two of us co-created. On our second last performance of the said piece I broke my toe in the first minute or so of the choreography. As this happened without a noticeable fall, stumble or curse of any sort, and probably assuming the look of panic on my face was part of the performance, my partner carried on with the choreography, and so did I. For about another seven minutes. The moment I walked gracefully into the wing, and outside the eye line of the audience I let rip, I thin shocking some of the first year stage hands in the wings. A fireman lift from a stage hand down the stairs of the theatre, and a call to my boyfriend later I found myself in full costume, hair and makeup waiting to be x-rayed. That was two years ago. 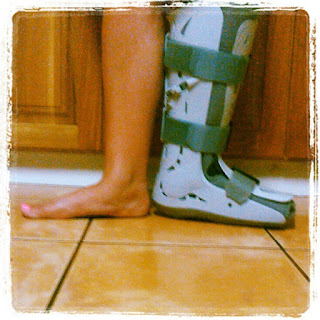 Three weeks ago my friend, Mr Gopala Chetty and I were to perform, yet again, the said piece of choreography for a showcase at the institution we were both teaching at. Needless to say we removed the move that had broken my toe before. We were to perform on a cement floor, and the new, fancy wooden floor was to start construction the very next day. After our performance. Once again, in full costume, Mr Chetty and I rehearsed the piece for the performance later that day. I came down out of a lift, in a manner that I shall call, probably unnecessarily, not entirely ideal. Smashing the little toe of my left foot and the knuckles of three of my toes into the soon to be converted cement floor. The two of us watched my toe grow and turn a rather pretty shade of red. I limped back to our offices, determined to change before going back to the exact same emergency room, determined not to be in the exact same costume as two years before.

A doctor confirmed a piece of bone had broken clean off my now purple toe. I was slapped in a moonboot, given enough painkillers to tranquilize an elephant (which bruised my ego slightly) and was told to wear my air-cast for 6 weeks.

Now a week before this incident I received notification for an audition for a musical that was to take place less than a week after my mishap. A musical I really wanted to partake in. My audition slot had already been booked, my backtrack had already been downloaded and my monologue rehearsed when gravity and I collided in a mash of bone and cement. I wasn’t going to take this sitting down. Well, metaphorically anyway. I arrived at my audition, looking the part if you could ignore the large grey moonboot on my foot and the set of crutches which allowed me to move ungracefully from chair to chair. I had also bitten the inside of my cheek open in the fall, and was on antibiotics.

As fate would cruelly have it, the entrance had a particularly high stair, which I had to take in full view of the panel. I lurched down the stairs, smiling as apologetically as my slightly swollen cheek would allow and started my story. I told the panel of my recent injury, but that I was propped up, medicated and there to audition. As the audition was also supposed to consist of a dancing piece, I told the panel that I would understand if they didn’t want me to audition for them, but that I was there none the less, and hopefully my CV would speak for itself considering my dancing skill. Ironically, the aspect of my audition I would be the least worried about. I was commended for my bravery, or perhaps my stupidity by the panel, and was allowed to audition. I sang my song and performed my monologue, under direction of the panel in three different accents, including German, Russian and American. The audition had gone well, they were astounded at how good my American accent was, and I was thanked, strangely sincerely for once, for coming in to audition despite my rather recent injury. After tackling the large stair back up again I was out. My first handicapped audition completed.
Posted by Unknown at 12:54