Making it to the big screen

They say that life happens while you are busy making plans. Apparently computer glitches too. So after planning for our whole team to watch the first airing of our short film together at the Rosebank Nouveau Cinema our team leader could not book tickets for us to watch our short film for the 48 hour film project on Tuesday. So, scattered throughout the week, our team watched our film as each had the opportunity. For me, this was yesterday. I saw myself on the 'big screen' for the first time. And immediately strengthened my resolve to diet...

After a full day of Lessac voice training in a workshop yesterday my partner and I left Pretoria to watch the films of Group G (I was doing my hair and makeup in the car via map-reading lights). Ours was the fifth film to be show and I found it fascinating how involved and personally vested I was with the characters on screen, as well as making mental notes as to what I felt did and didn't work with regards to my performance. About half way through I realized how tense I was and consciously forced myself to relax and try to enjoy the film. 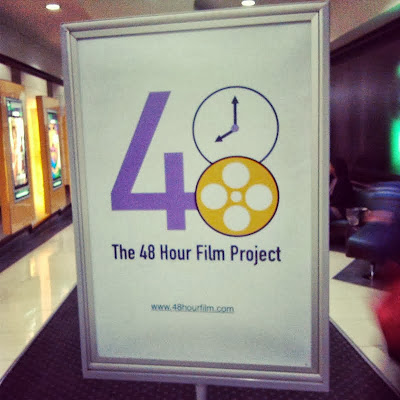 For those who don't know, the 48 hour film project is an international competition in which film makers have merely 48 hours to write, shoot an edit a film between 4 and 7 minutes long. After drawing the genre of your  film at 7 on a Friday evening teams have 48 hellish hours to create a genre specific film, including compulsory elements (a character, line and prop). You can tell how excited I am about this project as it the third I am writing a post on the subject, and I will probably post again once the films are released onto YouTube.

It was fantastic to see some of the other short films, and the talent that it is emerging in South African cinema. There were some really amazing concepts, and hopefully the beginnings of some fantastic careers.


As last night was the final screening of the films a small thank you was handed out to anyone representing the films. I was the only member of our team present, so when called for I stood up to fetch our little certificate and pop corn tub full of sweets as a "thank you", or more accurately, "Congratulations on surviving and making it this far" . I was welcomed with warm applause from the cinema audience as I walked to the front to receive our thank you.