No sick days for the wicked. Or for adjudicators.

“When are you supposed to leave for Witbank?”

The doctor asked at quarter to nine on a Monday morning while sticking a digital thermometer in my ear.

Mauritz had forced me to see my doctor before making the 160km, almost 2 hour drive to Witbank where I would spend the week adjudicating a speech and drama eisteddfod. I had tried not to let him see how sick I was feeling as I got ready to leave, but he knows me too well.

“You have a temperature of 40degrees. You are not driving anywhere”

“I don’t really have a choice. Literally 100s of kids and parents will be put out if I don’t go.”

“I’m worried that you could get delusional from your temperature. You can’t be driving. The people you are working for will just have to understand.”

I stopped arguing with the doctor, fetched my medication and got into the car to drive to Witbank. When you’re an actor there are no sick days. There’s no rescheduling the 100+ kids I had to see that day. And no one who was able to drive me to Witbank. And I had to go. I called my mom:

“Please call me ever 20 minutes or so. Just make sure I still know that I’m on the road.”

My mom wasn’t too worried.

“Even as a child you never convulsed from fever. You’re a fighter. We raised you that way.”

But she called every 20 minutes none the less to make sure that I was ok. To motivate me again for the next stretch and to tell me that I was stronger than I thought I was. Mauritz called as soon as he was out of his morning meeting. My left hand searched blindly for the call button on the steering wheel while my right hand held on to the door as I stuck my head out of the car where I had pulled off to rid myself of the berroca and oats Mauritz had tried to get me to eat before I left. About 15 minutes into my trip and I knew it was going to be a long drive. One of the longest.

As timing would have it, Mauritz phoned for the second time as I as pulled off on a traffic island or an of- ramp and was again throwing up. Clutching the car door so that it didn’t swing open with the passing traffic and desperately trying to keep the remainder of my hair clean. I could hear the concern as he listened to me heave over the blue-tooth speakers. The fever just had to break. But it didn’t.

I was half an hour late for the start of my session that afternoon. But I had booked into my guesthouse, I had fumbled through a shower and I had managed to drive myself all the way there. It was entirely prayer that got me there.

I was there, and I was somewhat ready to work.

The hall was silent as I walked from the back doors past parents and scholars to my table in the front. Everybody had been told that the adjudicator was very ill, but that she was on her way. The ladies in charge of the English speech and drama were visibly relieved at my presence, and just as visibly disconcerted by my pallor.

They had tried to arrange a stand in adjudicator so that I wouldn’t have to work that day. They hadn’t been able to find one, hence their relief when I actually showed up. They had been able to arrange a scribe and someone had run off to the pharmacy to get me every tablet that would break a fever and keep my food and the medication down. I wrapped myself in my blanket and worked until after 8 that evening.

By the time I got back to my room in the guest house, my fever had broken. 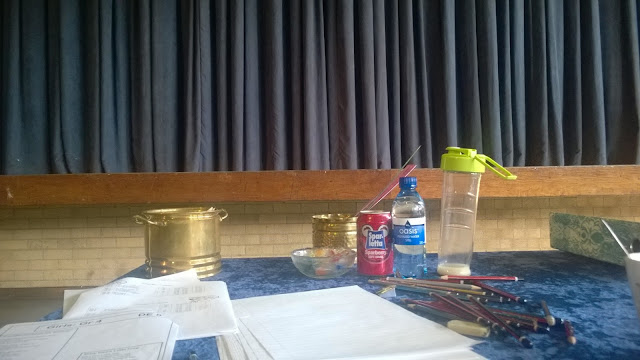