Hot cop look is what the casting director wanted to see, according to the email. I mentally started building up the look in my head. Tight leather pants, a bomber jacket perhaps a pair of aviators. And then I saw the reference image. It was more Lara Croft that hot-cop. Maybe hot-stripper cop. The single reference image for wardrobe I, the discerning thespian, was supposed to wear was a girl in hot pants with boots and the single line “hot cop look”.

It’s still winter. It’s still cold here. I put on skin tight long pants with my boots. I figured most of the women at the audition would go the same way. Just before I left the house I threw a pair of my shortest denim shorts into my bag. Just in case. Just in case the other girls were also in tiny, tiny pants. In the winter.

And they were. I arrived to the audition in long pants, over the knee boots and a tank top underneath my jacket and thick knitted woolen scarf. The other girls were already in their hot pants. One had long pants on and was looking rather skeptically at her legs. I trotted off to the bathroom and put on my tiny shorts. 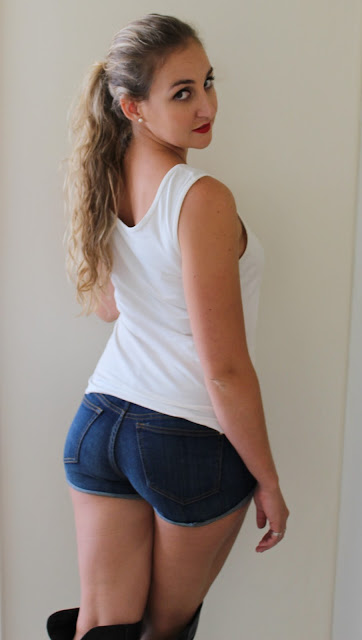 I grew up in leotards and swimming suits. I spent every afternoon of my childhood in lycra. That means that I really don’t care all that much about wearing skin tight clothing, or exposing some skin when it’s for the purposes of my work. So I’m not shy about wearing the tiny pants. But I also know I don’t have the stereotypical model body, and I would be standing next to models. Who were also wearing tiny shorts. So without bothering to look into the mirror, I had them on and I was out into the waiting area.

I didn’t have to wait long. We were herded in to start the audition.

It was a fun audition. More so than most. Especially since I went through to the next round of taped auditions which means I actually stand a chance of getting the role. But a small on the voice in my head had quite a laugh at my master’s degree in drama, when I was only required to shake my booty in hotpants and then look really tough.
Posted by Unknown at 00:23