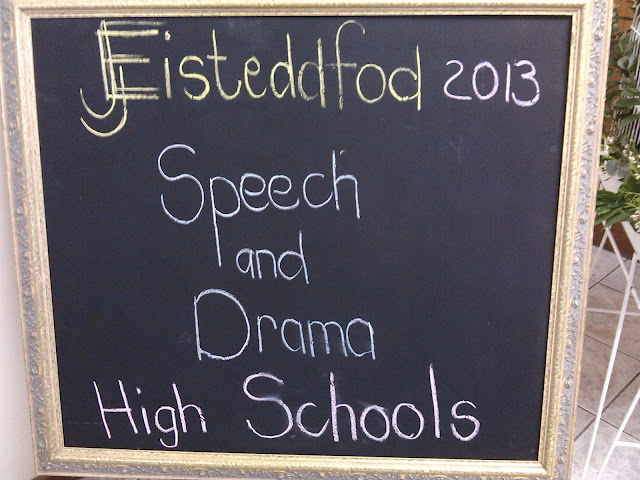 My grade 8 English teacher contacted me in April this year asking if I would be able to adjudicate the section for them. I agreed, as I know this time of the year is usually rather slow and last Monday I once more walked through the turquoise gates (which hadn’t existed when I was there) of my old high school. It was surreal to see something which had a familiar feel, but which had been completed revamped in the years since I had last been there. Face brick walls had been plastered and painted, the old stage curtains, who’s colour had been of an unknown origin and name had been replaced and the boards which once held the names of top achievers had been taken down and replaced with photos.


I recognised a few faces as I walked to the school hall of teachers who had been at the school when I was there, and teachers who had attended the school the same time I had. It was quite surreal to have the people who were once asking me to produce homework now making sure that the food was to my liking, bringing me cups of tea and asking me if I was comfortable and if there was anything they could do for me. It took some getting used to.


Apparently I took some getting used to for the staff too. I realised this when whenever I saw a teacher who had once taught me asking me what exactly it was that I was “doing now”. One of my register teachers, in a gesture I appreciated told me as she opened the electrified gate that she had offered to do so as she was curious to see what I now looked like after hearing the staff-room gossip about my return. She wasn’t the only one who wat in, or came and greeted me as I walked into the usually empty staff room for my supper or tea. My favourite comment for the week from an old teacher was:


“Chandré, are you doing this?”


And another’s teacher’s surprise at the fact that I don’t smoke.


Even at a stalk-tea my mother attended during the week I was there she happened upon one of my old teachers who informed her that the staff was rather taken by how I had ‘turned out’.


I was glad that my stint at my old high school was not my first time adjudicating high school speech and drama, and that I was already confident and comfortable in my skill set. This came in rather handy on the last day, two events before I was finished with the entire session. One of the teachers assisting me in the week-long activities came to me, as apparently one of the participants wanted to ask me something. As a rule, participants and their parents are not allowed to have contact with an adjudicator. A rule which I have always appreciated, and which people that I know respected. I didn’t mind explaining my feedback, or translating my handwriting to a participant. And I enjoyed it if parents that I know came and greeted me once their child had finished participating for the week. I assumed that the participant just wanted me to explain something. Especially when I saw that the Grade 11 girl who wanted to speak to had consistently received a well deserved 90% and over during the week.


As a rule when I give feedback I always write down something that the students do well, and something that they can work on. I always try and give them positive and uplifting criticism as I want them to return again in two years and to do it again. I am convinced that scholars participating in eisteddfods breed theatre-going and appreciating audiences later on. So I am always very careful not to say anything truly negative, no matter how harrowing the performance and to focus on the positive and what they need to work on ‘for next time’. The last section that my querying Grade 11 participant had taken part in, I had started my general feedback by saying that the dramatized dramatic monologues which I had seen in this section were all of a high standard. And, especially with older participants, I try to focus on what they need to work on for future performances instead of writing pages on what they are good at and do right. I then told them that even if there is a lot of feedback concerning improvements they should not think that I did not enjoy their performances.


The Grade 11 crouched next to me, and started in hushed and angry whisper (might I add with an entire audience sitting behind us):


My initial reaction was to say “You mean you” but I managed to refrain as she carried on with her tirade:


I replied with batting an eyelid:
“You know you did well because you received a good mark. Why do I need to write pages and pages on how good you are. I’m helping you by teaching you so that you can improve next time.”


She was unphased. In fact, I don’t think she really heard what I had said:


“Well, some people don’t know that they are good unless they are told so”


I wanted to say that in life you are not always told how good you are. And that I was at least very guarded and positive in how I gave my feedback. I decided that with a participant waiting to go on stage, and a whole audience waiting for to the two of us to finish it wasn’t the time and place for me to be dealing out life lessons. And as I was not her mother I did not particularly care how she handled feedback. Especially as it seemed she had spent most of her life being told how fantastic she was and did not know how to handle uplifting criticism. I also remembered my own motto: “If I didn’t bear it, or buy it, its not responsibility to look after it”


I decided to change tactics
“Do you want to go on with acting after this?”


She responded:
“Well, after this week definitely not. I’m just so glad that this whole experience is over and the week is finished.”


I decided that her insinuation that I was crushing her self confidence and dreams was not worth an angered response, especially as I knew the marks she had been receiving, and the feedback that give:
“I’m sorry you feel that way” I said generically  “I do however have to carry on”


“And and by the way” she had to get the last word in
“The piece I did I wrote myself, I was the one who was sick”
She had performed a piece about a girl who had a form of facial paralysis. It now also made sense why the structure of the piece had been slightly off, and perhaps why she had taken my comments so personally. However, as she had not handed her piece in when she registered, like all participants are supposed to, I did not see this. If I had I would have added the sentence: “I know the work is personal, but now look at it as a performer, and not a writer” and she still would have received the same mark and critique.


I bluntly said to the now fully recovered girl: “I’ve been sick too. And it has changed my life too. It’s something that has happened to a lot of people”


She skulked away. Perhaps upset that I didn’t apologize, perhaps upset because I didn’t just tell her how good she was. The staff member sitting next to me who had heard most of the exchange was aghast.


Upon return to the staff room I was fascinated by the fact that the teachers and Eisteddfod representative had been more taken aback and were personally upset by what had happened than I was.