The 48 hour Guerrilla Film Challenge is still on the go as I write today’s post, all teams probably still busily working and most likely rendering their footage, yelling at their various editing programs, clips that just won’t work and that idiot that somehow got in the frame despite the most noble of efforts.
I’m following the various status updates of my team members as they colourfully describe the process of working on this time sensitive project.

This year the genre for the challenge is action superheroes, and after dark last night I worked with the team from the Guerrilla Film Collective in Mellville, shooting, quite literally on the streets. Without giving anything  away, I was to be attacked, in a creative fashion, and our superhero would save me. And beat up the bad guy. Unfortunately poor ‘Creepy Guy’, formerly known as Doug, did not know at the time how literal this would be. But, first I need to start this tale with lighting and location.

Initially we had set out to shoot our scene in an alley, which served as an entrance to a residential building, and which was behind a shop. The team plugged extension cables through the shop's window, who had kindly let us use a plug for the three red-heads (lights used in filming). Now, these lights are really sensitive, and the bulbs are really expensive. And they get really hot. They are also rather temperamental when it comes to power surges. After we had rehearsed the shot, and started and shooting, with the lights all working and beautifully set up one of the tenants decided to leave the building. As the team was diligently moving all the expensive equipment they decided they would ignore our efforts and drive right over one of the extension cords. Naturally, this did not go well. The power in the restaurant tripped, the lights were all but thrown right over and went out and of course, the plug was flattened. We decided to relocate to an area with more patient bystanders.

We relocate to the home of Miss Denel Honeyball (our wonderful superheroine), a little way down the road from where we had initially decided to film. We relayed power cables through the windows of her house and set the lights up again, well, two as we the third one’s plug was out of action. As we set up lights, trying to figure out how best to shoot the night scene, and trying to get shadows and cables and lights out of the shot our director turned off one of the lights to see how this might look. As we were thrown into nearly semi darkness someone piped up, mocking the “Just one cap is enough” Skip Advert:
“Oohhhhh eh eh! Just one light is enough”
The rest of the crew actively agreed that this was not the case.

With the shadows creeping up on the weirdest places mostly sorted, aside from one the camera operators realizing that the annoying shadow in his shot was his own, we were ready for filming. As Denel and I walked into the distance we realized that we didn’t have our mark, where we needed to stop walking for the shot… As we called from down the road we were informed:

“The dog poo on the grass. That’s your mark.”

And then we were attacked, as we were required to be in the shot. Our would be attacker jumped out, as planned, from behind a car to attack us on the first take. Denel and I both burst out laughing at the face ‘Creepy Guy’ had as he ran into our shot. So much for the first take. Laughter back under control, and now knowing what to expect we did the take again. And could eventually move on to shooting the fight sequence.

As we were choreographing the scene Denel still joked about making the sound effects while doing the scene, and I suggested that she should perhaps use her breath instead. And when we shot she went onto autopilot making fight sounds. When we finished that first take the camera commented:
“Denel, we can add the sound effects in post”

This was followed by the director patiently waiting for the scene to finish before saying:
“Can you wait for action before you start so we can film it?” 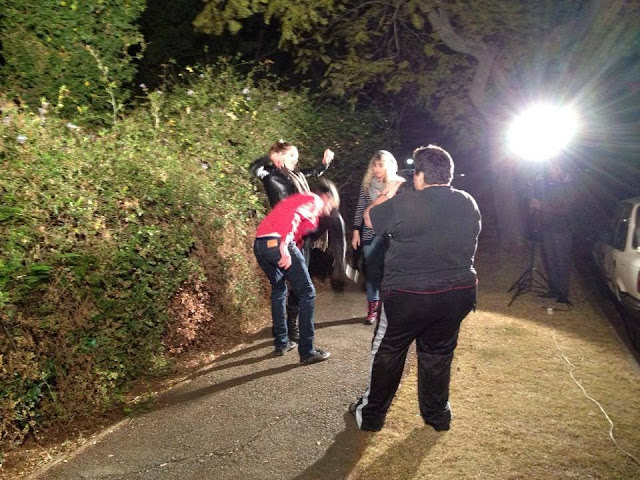 We shot from multiple angles, shooting the fight sequence slowly so it could be sped up in post, and for Denel and the protagonist to actually connect…which we actually got on camera when Denel kneed ‘Creepy Guy’ Doug in the face. For real. This after she had knocked him on the nose earlier while practicing the scene and Doug and injured himself falling on his knees. I think he was thankful for the his wrap.
The last shots we took after the fight sequence were my reaction shots to the superheroine kicking ass. A shot of girlish adoration was required, and with no real guidelines I decided to just do what happened naturally.

When the entire crew packed up laughing at me I assumed it was right…
Posted by Unknown at 02:34